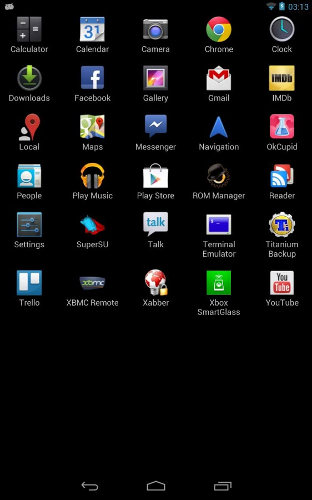 Abode Launcher is one of the fastest, and smallest launchers I used in Google Android. It should run pretty fast even on slower and older Android tablets and smartphones with less RAM,  small amount of storage, and a slower single core CPU. This Launcher does not have many features, so it is pretty fast. Abode only can be used to launch Apps.There are no wallpaper, animation, shortcuts or widget features in Abode, so it runs fast since it is not being slowed down by a lot of features and animations running all the time. Abode only displays all your apps which you installed or came pre-installed with your Google Android smartphone, and tablet. In my experience, Abode rarely crashes, or freezes like other launcher apps I tried in the past. It also only took me a few seconds to install this launcher. This launcher only uses about 10MB of RAM according to the Google Android Running Apps program. It also runs as a cache app. I notice this launcher does not slow down Google Android like other bigger launcher apps I tried.

Abode launcher file size is only 51 KB to download from Google Play, so it would download in only a few seconds even on the slowest wireless connection. 51KB is a very small size compared to 20MB of space like some other Launchers I used.

What I like about Abode launcher is that it displays all my apps in alphabetical on one page, and I scroll vertically instead of horizontally to view all my apps. I also never run out of space, or need to press All Apps to view all my apps like other launchers. Abode launcher shows all my apps on its homescreen with a black background. App shortcuts are also automatically added to the homescreen when I finish installing them, so I don’t need to add them manually.  Abode also does not run out of launcher space because Abode will add an extra space at the bottom of the launcher as more Apps are added. I just need to scroll down the launcher page to see more app shortcuts to launch.

I can also very easily restart Abode launcher by tapping on the back button when I am on the homescreen. Restarting Abode is useful if Abode is not displaying App icons properly, black screen problems, or icons are missing. If I do not see a new icon shortcut for a new app I installed, I just need to tap the back button on the homescreen to restart Abode, and the app icon for the new app should be displayed on the launcher.

Abode launcher is a great simplistic launcher for older, and slower Android devices with less RAM, a slower CPU, and less storage because Abode launcher uses very little RAM, runs fast, and use very little storage space on your smartphone or tablets storage.  Abode may also save a little battery power because of the low RAM, and CPU usage of Abode, so you do not need to charge your smartphone or tablet as often. Apps, and games also run faster sometimes because I have more free RAM, and CPU resources to use for playing games, and running apps like web browsers, and social networking apps.