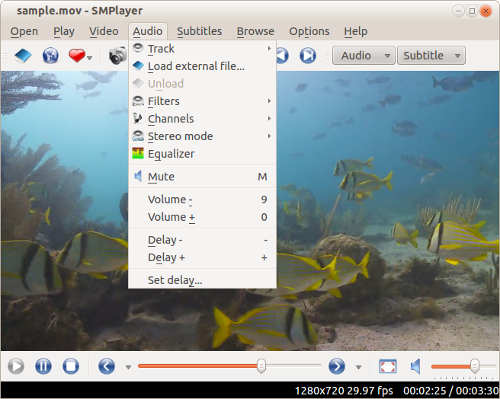 I have been using SMPlayer as my main video player in Lubuntu, Ubuntu, and other Linux operating systems I used. SMPlayer is one of the fastest, and most reliable video player software which I ever used. It can open all video and audio files like avi, mp4, mkv, mpeg, mov, divx, h.264, mp3, etc which I used on SMPlayer, and they open very quickly, and SMPlayer almost never crashes when playing back video and audio with it.

SMPlayer is based off of MPlayer which is one of the best video player computer software in the world. SMPlayer user interface is similar to older versions of Windows Media Player from Windows 95-98, so if you used older video players in the 90s, SMPlayer would be very familiar to you.

Video files open very quickly in SMPlayer where it only takes a few seconds to open a 10GB video file. When video is being played back in SMPlayer, the video plays back smoothly, and the sound quality is pretty good. SMPlayer also does not slow down my computer, so I can browse the web while I’m watching a video on SMPlayer. It also only takes a second or two to launch SM player on my older computer with only a dual-core CPU, and 1GB of RAM with Lubuntu 13.10 as my operating system.

The user interface for SMPlayer is also very simple to use. There is an open file button, play, pause, fast forward, rewind, full screen, volume, and other buttons which are found on video playing software.

There is also deinterlacing in SMPlayer which removes those annoying horizontal lines which show up when playing video recorded from a TV source like Analog Television signal. Deinterlacing in SMPlayer has been great because it hides the horizontal lines very well that I don’t see them anymore when watching pre-recorded analog TV from a USB TV Tuner.

SMPlayer is available for Linux, but it also has a version for Windows XP-8, so you can continue using SMPlayer even when you are in Windows.

You can download and install your free copy of SMPlayer from the Ubuntu software center if you use Ubuntu, or you can go to smplayer.sourceforge.net/ to download your free copy.