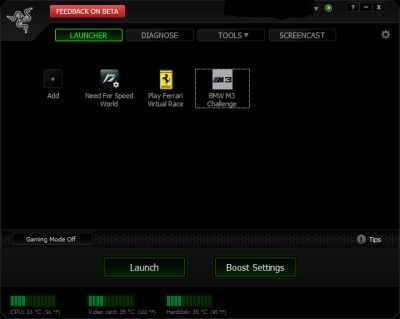 If you have an older or slower Windows computer with less RAM, a slower CPU, and older video card, or want to run Newer games at higher video quality settings on your computer, using iobit’s Razer free Game Booster software will make your gaming experience more smoother, reliable, and more games more entertaining.

I have been using Game Booster to optimize my Windows 8 computer  with 1GB RAM, a Dual Core Intel 1.86GHz CPU, and Nvidia GTX 620 1GB video card when I play games like Need For Speed World. I notice when Game Booster is ON, my game’s video seem more smooth, and slows down less. Game loading times are also faster, and my games don’t crash, or get interrupted by third party software like Chat programs, and Disk Defrag programs running when my games are running. Game Booster is also useful to use even if you are not a gamer because it maximize your computer hardware, and Windows performance, so you have more free RAM, and CPU Cycles to use for the program you are currently using like Image Editors, Video Editors, Office Suites, and Web Browsers. Plus, you won’t get interrupted by chat programs, multimedia players, and notifications from third party software when Game Booster turn them off if you set Game Booster to also turn off your third party programs, so your computer has less running.

What Game Booster does is turn off un-needed Windows background programs and services from running, so your computer has a lot more free RAM, and CPU.

When you launch games with Game Booster, you can also set it to run games in Game Desktop, and stop Explorer.exe to have even more free RAM, and CPU cycles to dedicate to running your games faster.

Changing the Boost setting is easy. You only need to click on the “Boost Settings” button, and check the background services and programs you want to stop. There are also more performance speed up settings to defrag/clean your RAM, launch games in Game Desktop, clear your clipboard, change your power plan to the high performance power plan, turn off Explorer.exe, and Turn Off Windows Update while GameBooster is ON.

You can also add your favorite games to the Game Booster launcher to launch games with Game Booster, or you can turn on GameBooster on by clicking Gaming Mode Off/ON in the bottom left of Game Booster.

There are also temperature monitors on the bottom of Game Booster to see your current temperature for your CPU,  Video Card, and hard drive. Seeing the Temperature is useful to see if your computer is over heating after gaming, or when it is on. If it is over heating a lot, it could mean you need to clean out dust from your computer to blow it out with compress air, or you need to replace a fan on your CPU, video card, or case.  More advance computer users can use the temperature settings to make sure they are not overclocking their CPU, Video Card’s GPU and Memory too high, so they don’t melt or damage their computer hardware because of overclocking their CPU, and video card too high.

There is a Diagnose tool in Game Booster to see what hardware, software, and operating system is installed on your computer.

The tools section in Gamebooster has a Tweak section for tweaking the settings of Windows for faster performance, Defrag program to defrag games which you placed in the Game Launcher, and a Drivers tool to see if all your hardware drivers are updated to maximize the performance of your hardware for games by using the latest drivers available for your video card, sound card, and other hardware installed on your PC.

iobit’s Razer GameB ooster is a easy and free way to boost your gaming performance by just clicking a few buttons on Game Booster to end background programs, clean RAM, and use the Game desktop for faster gaming and computer performance when playing games, or using regular Windows programs on your computer.