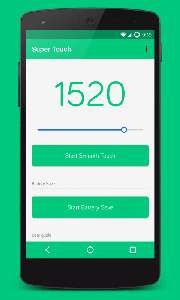 Super Touch Speed Sliding App is a free Performance Tweaking Android App which will make Google Android smartphone or tablet run faster when sliding, zooming, list-scrolling, loading apps, typing, gaming, and more. It also has a battery saving option which improves the battery life of your Google Android device without slowing down its performance.

The Super Touch App takes only a few seconds to load, and shows some pictures and text saying it would make Android super smooth when sliding, zooming, and list-scrolling on Android.

Super Touch App is very easy to use at improving Google Android’s performance. I only need to launch it, and tap on the “Start Smooth Touch” button. If I want to, I can adjust the level of Smooth Touch with the slider button on the top of the app. Adjusting the level to 500-9998 will unlock the Advance Functions in Super Touch. The Advance Functions will make your device even smoother. On the newest version of SuperTouch, users have to pay $1.50 to set the level above 460 in my experience.

It is safe to use because it does not overclock your device which may result in overheating problems, and Super Touch does not need root permission which can make Android less safe to use sometimes.

After you tap on the Smooth Touch Button, you need to wait a few minutes for smooth touch to start, and optimize the performance of Android. You can close Super Touch after Optimization, and still experience the faster performance, but it will take about 1 minute after optimizing your device with Super Touch to notice the speed improvements when opening apps, using apps, and scrolling up and down pages.

I set my Asus Nexus 2012 to 800, and it works pretty fast at level 600. I notice when using Super Touch my web browser, and some games seem to run more quickly, and I get fewer error messages which ask me if I want to force stop apps.It take a few minutes to optimize Android after each startup, but now my tablet seems more responsive, and experience fewer slow performance problems when using big apps like games, and web browsers. I like that I can close Super Touch after Optimization is finish, so my tablet does not need to have it open in the background using up RAM, and CPU resources.

If you have a 1080P touchscreen the recommended level is 1520-3998. You can set it lower or higher depending on how powerful is your video chip on your smartphone and tablet.

You can also stop Super Touch, and Battery Saver if you are experience any problems when you are using it with certain apps.

The Battery Saver in Super Touch is easy to use, and does not slow down Google Android when Battery saver is on.

I like the modern sleek design of Super Touch, and that the Guide for Super Touch is located on the main window of the App.

Super Touch does not have any advertisements on the app, and it is free to use.

The App now has an App rating of 4.2 out of 5 stars in the Google Play App store for Android.