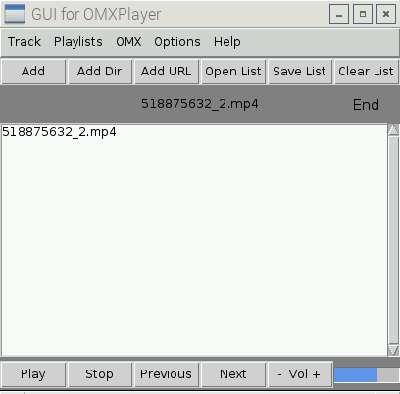 TBOPlayer is a fast and simple to use free Frontend/GUI user interface program for Omxplayer for Raspbian. Omxplayer is the default video and music player for Raspbian Linux. TBOPlayer uses jbaiter’s pyomxplayer wrapper to control omxplayer with TBOPlayer user interface program. But, omxplayer is harder to use for users who are not used to using the command lines in Raspbian Linux. TBOPlayer is made with the Python programming language, so it works on the Raspberry Pi after you installed it because Raspbian can can run Phython programs without the need to install other programs. TBOPlayer also runs very quickly on Raspbian. I never experience slowdown problems when using TBOPlayer to control Omxplayer when logged into the Raspbian desktop. TBOPlayer only takes a few seconds to open after I click on its desktop shortcut icon.

TBOPlayer makes using Omxplayer a lot easier because it adds a simple user interface to use on Omxplayer which makes using Omxplayer a lot easier. TBOPlayer has buttons to add files, folders/directories, and even URL Links from YouTube to its playlist. There is also a button to clear your playlist which is loaded on TBOPLayer. Users can also open, and create playlists in TBOPlayer to make playing a lot of media files faster. It is also possible to load YouTube playlists in TBOPlayer.

TBOPlayer also have media playback buttons like play, stop, previous media file, next media file, volume up, and volume down.

Users can also change the audio output in the options from HDMI to Local which is the 3.5mm headphone jack on the Pi. The ability to change the audio output port from HDMI to Local is useful for users who don’t use their HDMI port for sound, and use a regular HDMI monitor which does not have speakers like a TV with HDMI TVs. Users can also change the repeat mode to single, repeat, shuffle, and playlist in the options.

You can also change the directory options of initial directories for tracks, playlists, omxplayer location, and YouTube download directory.

TBOPlayer plays video files in Fullscreen mode, but you can set the video window size to a custom window size by typing a command like –win “10 10 640 480” in the options box. This command sets the Video window size to a width of 640 with a height of 480 pixels, and a 10 pixels margin on the width and a 10 pixel margin on the height. Resizing low resolution video to its original resolution like 240P, 360P, and 480P will make videos look better because they are not stretched to fill your higher resolution monitor. Plus, you can also multi-task like browse the web while you are watching a video on a smaller window. re-sizing a video to a smaller size would make it play smoother because your computer does not need to use as much video processing power to display a small video window compared to a fullscreen video which uses more system resources to display a fullscreen video.

There are also buttons to maximize, minimize, and close the TBOPlayer window in Raspbian Linux.

TBOPlayer is a simple, fast, and reliable user interface program for Omxplayer which makes using Omxplayer a lot easier.

I typed in these two commands I found on TBOPlayer’s github website:

into a terminal command line window in Raspbian’s Terminal program to install TBOPlayer on Raspbian Linux for the Raspberry Pi.

After the install, there should be a TBOPlayer shortcut icon which you can use to launch TBOPlayer from the desktop.

Typing in tboplayer into a Terminal command line window, and pressing enter will also launch TBOPlayer when you are logged into the Raspbian desktop.