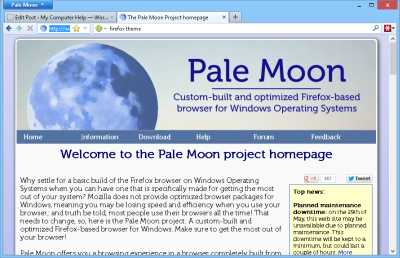 Pale Moon is a free slim version of Firefox made by Pale Moon which optimize Firefox for maximizing the performance and speed when used in Windows. I have been using Pale Moon for a few days, and it works better, and faster than Firefox It does not slow down my older computer with only 1GB of RAM, Intel Dual-Core 1.86 GHz CPU, and 320GB hard drive running Windows 8 Pro. Pale Moon uses less RAM, and CPU cycles, so I can have other programs open without much or any slow down.

Before, when I was using Firefox 21,  it got so slow when browsing big websites with a lot of flash animations, share buttons, and JavaScript that Windows froze until my computer can catch up, and load all the website images. Pale Moon also does not slow down as much as Firefox when multiple tabs are open, or I been using it for a long time unlike Firefox which seems to slow down after using it for a while with a few tabs open.

Palemoon is great for people who want to continue using the Classic Firefox theme instead of the more modern version user interface of Firefox 30 which is harder to use sometimes because the new version of Firefox 30 is too minimalistic, and a lot of the buttons, and menu are harder to find in my experience because the Firefox button on the top right is missing in newer versions of Firefox 30.

Pale Moon’s window also re-sizes, minimize, and maximizes very quickly, and it only takes a few seconds to open by clicking the Pale Moon Desktop shortcut.

However, with Pale moon, most big websites like YouTube, IGN, Tech Crunch,and Huffington Post would load in secondswithout seeing those “Not Responding” errors on the top of my web browser, or have my hard drive read and write a lot when loading pages with a lot of pictures, animations, and features.

The User interface in Pale Moon is like Firefox, so there is almost no learning curve using Firefox since I already know how to use Firefox. Palemoon has all the most used features which Firefox has like tab browsing, Bookmarks, autofill, address bar, search box, and more.

Pale moon also supports existing Firefox themes, add-ons, and plug-ins like Adobe Flash Player, and Java, so you can use Pale moon like Firefox, but faster.

Pale Moon is a fast, slim, easy to use, and stable web browser optimize for Windows based computers.